Let's say I was approached by Kim Jong-un, the murderous North Korean dictator, and asked for dietary advice. Being a patriotic all-American girl, I'd of course give him the worst advice I could think of. My plan would be to provide a diet that fooled him into thinking it was working, but ultimately wrecked his health, made him miserable, and maybe even gave him an eating disorder as a bonus.

Now, how would I do that? I'd probably tell him to starve all day, exercise in a fasted state, then eat a ton in the evening. In other words, I'd put him on a chronic intermittent fasting plan.

Intermittent fasting has multiple variations, but at its core, "IF" is a method of going a certain period of time without eating, then consuming all you want for an allotted period of time. IF's promises run the usual gamut: fat loss, more energy, better health, insulin sensitivity, longevity, spiritual enlightenment, and even muscle gains.

Intermittent fasters pull from a variety of scientific studies and success stories which show that their diet delivers. But despite the science, the initial benefits don't last for everyone and can result in dietary damage and even disordered eating.

As a nutrition coach, one of my most common tasks with clients who are struggling to lose fat is to rehab them out of their fasting tendencies. Did you catch that? They pay me to fix the damage done to them by IF. It was a surprise even to me. While I knew IF wasn't right for everyone and had its drawbacks, I was shocked to see just how much harm had been done to many former IF fanatics.

Not only did fasting fail to make them ripped, it made them gain fat over the long haul, gave them a food complex indicative of bulimia, and compelled them to seek help from a nutrition therapist.

The truth is, I was an early adopter of IF. I intermittently fasted for well over a year, so my clients' tendencies to skimp on food in the morning and lose control at night sounded familiar. For me, it turned into a battle with balance and body fat. My workouts suffered, my muscle gains stalled, my body fat crept up, and my mood was awful. Those starved hunting dogs that Kim Jong-un supposedly feeds his enemies to? I could've run with that pack.

As a coach, I soon learned that I wasn't alone. If you've been seduced by a very sciency-sounding plan that boils down to a starve/binge cycle of eating, I'd advise you to reconsider drinking that particular flavor of Kool-Aid. And if you've already been intermittently fasting while watching your body composition get worse, join the club, then reclaim control of your physique.

How It Works, How It Fails

Proponents believe spending time in the fasted state will force the body to use stored fat as fuel rather than muscle glycogen or blood glucose from a recently consumed meal. But does using stored fat for fuel during the day really pay off if you're overeating continually at night?

The problem with intermittent fasting is that when mealtime finally comes around, it becomes a free-for-all event for many, and this is even encouraged in some plans. Fasting triggers bingeing. It happens for two reasons:

An intermittent fast becomes a dance of benefits verses drawbacks, and the benefits – while they look remarkable on paper – usually don't outweigh the drawbacks.

Intermittent fasting proponents say that during workouts the body will be forced to pull energy from stored fat in the absence of blood glucose that normally would be present after a meal. So when it comes to training in a fasted state, the goal is to deplete glucose then work out before replenishing it.

They say doing so can even create an anabolic effect and actually make someone build muscle during an intermittent fasting regimen. (When not eating for most of the day is touted as a muscle-gaining plan, you know the fitness industry is running out of book ideas.)

But does using your own stored fat as workout nutrition really fuel the toughest workouts? Are you able to work as hard when you're only running on the fumes of last night's binge? Do you think strong bodies are built on ketones? Do you really think that quality of training is improved by a lack of nutrition? Are you training hard enough to know the difference?

If you train fasted in the morning, then wait several hours to consume anything, the likelihood of building and repairing muscle tissue is slim. This is a recipe for weak workouts and catabolism. Topped off with an evening binge, it's a recipe for fat gain. Let's not forget the most common eating pattern of overweight people: skip breakfast and lunch, binge at night. If your diet mirrors that of the typical slob, maybe it's time to rethink your plan.

Pre- and intra-workout nutrition improves your ability to work harder, recover faster, and build muscle, so how would it make sense to train without it? Because of the supposed growth hormone secretion via fasting? Didn't we learn that was inconsequential back in the 90's?

Many IF'ers, after the initial fervor of the new plan wears off, quickly modify their intermittent fast to include extra feedings. If you're really on top of the latest IF trends, you're familiar with the one in which coffee, butter, and MCT oil are blending together for breakfast. This is considered part of an intermittent fast, but when your coffee contains 500-700 calories, you're not fasting. You're just not chewing breakfast.

Then why call it that? Discard the sign your favorite diet expert is determined to hang around your neck and admit that three feedings a day is no more IF than eating "just a little dairy and fish" is veganism. Embrace results; drop the need for a label.

If you follow the most common intermittent fasting diets to a T, you could end up qualifying for two eating disorders: bulimia and binge eating disorder. The DSM-5 (Diagnostic and Statistic Manual for Mental Disorders, fifth edition) has a detailed criteria list for both.

Now, this is the point where you should be struck by a sense of irony: your diet, if you do it perfectly, may place your behavior into a psychology reference book along with sociopaths and people who compulsively eat their own hair. Let's think on it.

According to the DSM-5, a person is said to be bulimic when he regularly consumes an abnormally large amount of food in one period of time and then makes a compensatory effort to rid himself of it. Fasting and exercise are two such ways (outside of purging) that a bulimic may do this. These are common methods of compensation for those who fast, become ravenous, and then overeat during their window of opportunity.

Binge eating disorder is exactly what it sounds like: consuming an abnormally large amount of food in one period without the effort to compensate.

In short, if you're an intermittent faster and you regularly go for many hours without eating, then follow it up with eating a lot in a shorter period of time, the line between diet and disorder is blurry. Especially for those who wake up the next morning with a sense of urgency to work out for the sake of mitigating what they consumed the evening prior.

Sure, you could say that this is a common occurrence with our culture. We eat too much in a sitting, feel guilty about it, and then make an effort to undo it at the gym. But when the entire framework of your diet is not eating for an extended period of time, it directly or indirectly promotes eating excess in a shorter period of time. When this is done repeatedly and intentionally, there's a problem. This is why I refer to intermittent fasting as "Intro to Disordered Eating 101."

For those who already have disordered eating tendencies, a diet that validates their behavior is a clever way to ensure their loyalty. IF is the justification they need to defend their starve/binge behaviors. It feeds their need to punish themselves and supports their temporary enjoyment of overeating. Much like raw veganism has been used as "cover" for anorexia, IF provides a scientifically-supported excuse to practice borderline bulimia. And borderline bulimics love that shit.

The diet even teaches them to become more skilled at their disordered eating patterns. Instead of just eating inadequately for the first half of the day, they now have permission to omit meals completely and eat even more during their window of feeding opportunity. The diet is a coup for a borderline disordered eater, and can turn many into full-on bulimics.

Sadly, trying to convince someone in the midst of a disordered eating cycle that their diet is counterproductive and making them look worse, not better, is akin to convincing an inebriated sorority girl that she shouldn't drive. It's tough to see the disordered patterns appearing when you're submerged in the IF culture. (They sell T-shirts. Really.)

Individuals who never want to think of themselves as weak-willed quitters are even more susceptible to the trappings of IF. They have invested. Their dogged determination drives them to continue. They don't want to "fail" the diet. When it stops delivering on its promises, they up the strictness by fasting extra hours, trying to eat less, and increasing their cardio... a recipe for a bigger binge at the next opportunity.

Now maybe, since I'm not flinging oppositional studies at you, you're not convinced to think twice about IF. That's okay. I understand its attraction. Just know that you do have permission to stop using an eating plan that isn't working out for you. When you're ready, I'll even help you get back on the path to safe, anxiety-free eating with the tips below.

How to Ditch Your Intermittent Fast 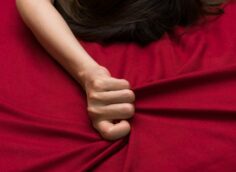 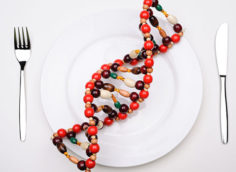