In part one of this article, I presented a few ideas as to why the obesity rate is rapidly increasing in spite of the fact that, on average, our calorie consumption as a society hasn't increased all that much.

In that article, I discussed the idea of a "displacing" food, a food that provides very little nutrition while simultaneously taking the place of the nutritious foods you might have consumed instead. In my opinion, displacing foods are covering our breakfast, lunch, and dinner tables and it's this shift toward empty calories that's making us unhealthy and obese.

In this article, I'd like to discuss another displacement idea. While displacement foods are probably at the root of many of our health and body composition crises, what I call "displacement debates" have also become a real problem. According to my definition, a displacement debate is a debate that, rather than helping people move closer toward healthy nutritional choices, simply acts to confuse and paralyze them.

For example, the average North American barely knows what a carbohydrate, protein, or fat is, yet when they hear well-respected experts at the ADA recommend high carb diets and the highly (though not universally) respected Atkins group recommend low carb diets, they get so confused and frustrated they ultimately do little or nothing proactive to improve their health.

This argument is an example of a displacing debate: an academic argument that pushes the more important problems out of the public discourse. For the average North American, following either the ADA recommendations or the Atkins recommendations would go a long way toward improving their health. But instead of suggesting that people just do something, these groups continue to bicker about who's right at the expense of an ever-growing obesity rate.

Below I've presented six of the interesting displacing debates I've heard argued lately. Hopefully by discussing them I can put to rest the idea that these issues are of critical importance to your overall health and body composition.

I'd like you to understand that these represent small, fine tuning details which are only relevant to a small percentage of the population, if that. On the whole, these debates do more to confuse and paralyze people than to encourage them to take their health into their own hands.

We all know fruit provides fiber, vitamins, minerals, and low glycemic index carbohydrates, so it should be no surprise that many experts recommend eating a few servings of fruit each day. Heck, this notion has even been turned into a clichéd rhyme: "An apple a day keeps the doctor away!"

Yet some experts out there (short-sighted experts with a real lack of perspective, I might add) actually suggest that fruit might be bad for us! That's utter nonsense.

So, imagine you're someone with a lifetime of eating habits that are less than optimal (for some of you, it might not be so hard to do) and you're exposed to this debate. What do you do? Well, nine times out of ten, you figure that if there's a chance fruit is bad for you, you might as well stay away from it – probably better to reach for a Big Mac instead. After all, it does taste better.

Speaking again of fruits (and vegetables), it's recommended that the average person consume two pieces of fruit and three servings of vegetables per day as a bare minimum. Athletes probably need even more, yet most North Americans (athletes included) consume far less than the standard recommendation of five servings of fruits and vegetables.

So again, imagine you're someone with a lifetime of bad eating habits and you're exposed to all this bickering. What do you do? Well, you'll probably avoid the fruits and veggies, wait for the experts to finish dueling it out, and reach for a Snickers bar instead.

Verdict: Get sufficient fruits and vegetables in your diet before worrying about whether they're organic or not. Once you've done that, worry on.

What about milk? Most T-Nation readers know my stance on moo juice. In my opinion, it's not necessary, doesn't always "do the body good," and should be minimized in the diet (although I see no need for total elimination unless you're lactose intolerant).

However, if we could simply get more people to drink milk instead of sugary soda, we'd have less obesity and disease. But instead of focusing on healthy behaviors, experts will bicker on and on about regular milk vs. raw milk. Of course, all this does is serve to draw negative attention to milk and away from the other healthy decisions people could be making.

Sure, if it were possible to get raw milk that was guaranteed aseptic, it would be better than processed, pasteurized milk. But faced with the confusion, what do you, the hypothetical sub-optimal eater, do? Well, nine times out of ten, you avoid both kinds of milk and drink another Coca-Cola instead.

Verdict: Limit milk, and drink calorie-free beverages like water and green tea instead.

Speaking of beverage consumption, people are dehydrated because they drink too little water while drinking too many caffeinated, diuretic drinks (coffee, soda, and alcohol). Dehydration leads to all sorts of health problems for the inactive, not to mention the decrements in athletic performance seen in dehydrated athletes.

But rather than simply promoting the heck out of water consumption, experts will bicker on and on about tap water vs. bottled water. Sure, good quality bottled water is usually a better choice, but don't be one of these people who stay away from tap water, forget to pick up their bottled water, and simply remain dehydrated.

Verdict: Drink sufficient water first; worry about the source later. (Of course, you may want to avoid drinking out of puddles next to pig farms in Uganda.) Put a water filter on your tap or buy one of those filter jugs you store in your fridge and be done with it.

And how about the bottles the water comes in? That's right, the glass vs. plastic debate. Just the other day, I was recommending that a group of my athletes pick up some Tupperware so they could whip up all of their meals and shakes in the morning. It's easy to make a good food choice during the day when you've got all your good food with you, pre-cooked, pre-wrapped, and ready to be eaten.

After the talk, one of the athletes came up to me and told me he avoids Tupperware altogether because of the potential leeching of xenoestrogens into his food. When I asked what he uses to store his food in, he told me he doesn't even preplan his meals. He also told me he needed to lose fifteen pounds and that he was overweight because his nutrition sucked!

Buddy, I agree that glass containers may be marginally better than plastic, but for the love of God, pick up some plastic if it'll help you plan your meals! And this was a world-class athlete! You can imagine how the average guy fares!

Verdict: Plan your meals in advance, storing them in woven baskets if necessary. Buy the best containers you can afford. If you can get the glass versions, great; if not, the generic plastic ones will do just fine.

Most weightlifters eat lots of protein and that's no mistake. I've outlined the myriad of benefits associated with a high protein diet in my article, The Protein Prejudice. One of the best ways to get all that protein is by eating a lot of protein and micronutrient-rich lean meat. Protein supplements are okay to supplement your diet, but real food should be your nutritional mainstay and there's nothing better than good ol' fashioned meat.

Since eating more protein can increase metabolic rate, improve your weight loss profile, increase protein turnover, accelerate exercise adaptation, and (when replacing dietary carbohydrate) decrease the chance of cardiovascular disease, it should be clear that most people would do well to increase their consumption of lean meat.

So imagine the dismay someone might experience when hearing that the experts are now bickering about the type of meat we consume. Many experts muddy the waters when discussing free range vs. grain fed meat, telling people that grain fed meat (the only kind you can find in many grocery stores in North America) is full of toxins, bad fats, and hormones.

Sure, free-range meat is probably a better choice, although there's little proof the supposed toxins and hormones actually get passed on to us. But again, imagine you're someone with a lifetime of eating habits that are less than optimal and you're exposed to all this bickering about lean protein. What do you do? Well, when you're afraid of the meat you have access to, you shy away from all types of lean meat and reach for another bagel. Bad choice!

Verdict: Find the best meat you can by going around to various grocery shops and butchers. Owners of health food stores may also be able to help you locate the best stuff. But don't be afraid to eat the meat you find in your grocery store – the reports of your impending death are greatly exaggerated.

These are just a few of the displacing debates gaining momentum in the nutrition world. Throughout your lifetime, you'll be inundated with new experts, new nutritional plans, and new "revolutionary systems." Rather than letting these new ideas be a source of frustration and confusion, do your best to get past the marginalia, to get past the differences between all the new programs, and try to discover for yourself the basic principles all the successful programs seem to be built upon.

Most importantly, when faced with a choice between two good options, one of which may be marginally better than the other, but both of which would be an improvement over what you're currently doing, just pick one and go with it. You can optimize later, as long as you make an improvement now. There's no debating that.

It's kinda odd, maybe even politically incorrect, but science says it works. Check it out.
Diet Strategy, Losing Fat, Nutrition & Supplements, Tips
Chris Shugart May 13
When it comes to building muscle or performing at your peak athletically, nutrition is 50% of the equation. Or is it 75%? Maybe 90%? Whatever. It's, like, really important, okay?
Feeding the Ideal Body, Nutrition & Supplements
Mike Roussell, PhD July 18

It's a diet so simple, a caveman can follow it. But can it help you build a stronger, leaner body? Find out here.
Diet Strategy, Feeding the Ideal Body, Nutrition & Supplements, Paleo Diet
Yael Grauer August 23 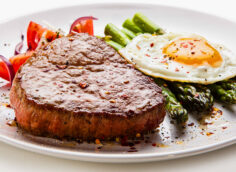