So why an article on dairy? Because the controversy it elicits gets people hotter than Louis Pasteur's Bunsen burners, that's why. In fact, raging debates have broken out many times over the years here among the T-faithful. Just recently TC had to break out the rubber bullets to keep an angry mob of anti-dairy zealots from tearing down the place.

Even so, our author may not have bothered with this article until Chris (Shugart) urged, "You go, brother; you da man to start us a war!" Intrigued at the thought of irrepressible flames raging through the Forums, I complied.

So, let me preface this by saying, straight up, that points herein are exaggerated to bring our dairy differences into sharp relief. Although suggestive of how some people indeed feel, this is merely a parody to spark debate.

This article is not a collection of actual quotes from any of the groups which sit on opposing sides of the dairy debate. Do not take it all as truth, even if one can find some level of evidence on any given side (otherwise there'd be no disparate opinions). So let's see where YOU stand. Here's the first shot in our little "war."

"Dairy is a necessary part of any physique-improving diet. Duh!"

If you take a look at the epidemiological evidence, you can indeed see diets that include low-fat dairy products seem to help with fat loss and weight control. Although the calcium and possibly the vitamin D appear important, the dairy foods themselves – as opposed to any one nutrient–seem to be more effective.

Whether the mechanism of benefit is enhanced thermogenesis, preservation of lean tissue, or some more esoteric notion involving parathyroid hormone and adipocyte function, the results speak for themselves. When we consider these leanness benefits, along with the peri-workout muscle building benefits, we must conclude: dairy rocks!

But then comes the return fire...

"What?! Dairy hikes insulin so high Atkins is rolling over in his grave!"

Insulin aficionados are quick to point out that dairy products have a real knack for jacking up this hormone. And with all the recent (read as "Atkins era") attention on keeping this indiscriminately anabolic hormone in check, they're not alone.

Despite having long been part of the "healthy food choices," perhaps these food items are more like pastries than we've been led to believe. It is true that, however necessary for life, we don't want fat-friendly insulin running wild on us – at least throughout most of the day. So, despite their low caloric load, are sugar-free yogurt, cottage cheese, and skim milk part of the reason for some weight problems in certain individuals? We say yes! Down with dairy!

Raw milk! Raw milk! It's the way your grandma drank it, right? Think about it: Bacteria that boost beneficial flora in our intestines, enzymes, and rich amounts of nutrients are to be had! Down with the man! Ultra-pasteurization and homogenization are the result of an industry conspiracy to boost shelf life and profits.

Milk, sold as it commonly is, has been linked to allergy, asthma, repeat infections, projectile vomiting, and even some cancers, according to a popular "Foundation" web site. But there is an alternative – if we're willing to do what must be done to obtain it.

Raw milk can indeed be "Certified" according to a trademarked term for milk produced according to certain standards. The standards are set forth by a well-known splinter industry group. The raw but certified milk is produced by a number of large dairies and can be sold, retail, in 24 states. And let's not even get into the countless farms from which you can score live, fresh milk. With that kind of prevalence and history, how can it be bad?

...and then comes the thunder of return ordnance fired against the raw milk people...

"Yo! You've drunk too much contaminated milk! Good luck fighting off the listeria!"

That's right, you leftist crazies! How do you think modern society has done away with centuries of disease and suffering? We've eliminated the organisms that cause it from our daily lives. Safe, pasteurized milk is still loaded with nutrition – without the risks.

With a little web surfing you'll see that a well-known anti-quack (consumer advocate) web site is quick to point out that many disease-causing bugs are killed by pasteurization: dysentery, salmonellosis, tuberculosis....

Is it worth sparing 10% of the vitamin C or thiamin if we risk painful, contagious, and potentially lethal disease? Is the preservation of some small amount of helpful bacteria or questionable growth factor worth it? Apparently not to the Feds. The sale of raw milk has been banned in about half of the states and interstate distribution is a major no-no. Do you really want to go to jail for raw milk bootlegging?

(Have you ever spoken to a dyed-in-the-wool vegetarian? Are you one? If so, you're aware of the almost disturbing things that can be said about dairy products. Perhaps the inter-species or vegan sects will want in on this clash as well...)

"No other animal suckles the milk of another species!"

Humans are alone in drinking milk during adulthood. And even then, most of the world's population, perhaps 70-80%, cannot digest it properly. Wake up and smell the fermenting lactose! Plus, according to a vegetarian group in Toronto, even our bones are at risk – that's right risk, from dairy:

North America is among the regions of the world with the greatest dairy intake, yet it has one of the highest incidences of osteoporosis. So what have we got here? Adult milk drinkers – of milk that's not even human – with bone loss and maybe even anemia thrown-in. Does any of this look natural? We say "stop relying upon hormonally bloated utters." That'll do your body some real good.

"Yeah, well no other species has to rely on agriculture to support its huge numbers, either! If it helps my physique and doesn't run away, it's going down the hatch!"

Listen. Milk, like any other nutrient source below us in the food chain, is available for our benefit and our survival. It's great for muscle growth and that alone has us sold. We humans do plenty of harm interacting with our environment and yes, we subjugate other species. But what if we didn't? The human race would starve or society would degrade... and we'd be small while watching it happen!

We say let humanity learn do what it can to thrive while technology and accumulating wisdom allow us to interact more safely with the other critters. And let us personally grow in the meanwhile!

(And lastly, just to make this a "war of four armies" let's ignite the fires of those who cry "bloat!")

"Stay away from dairy two months prior to competition; it'll make you bloated and smooth!"

Every bodybuilder worth his chicken breasts knows that milk causes bloating. You can't look crisp and dry and ripped if you're holding water. Drink milk like you do in the off season and you'll risk being soft at the show! Drop all dairy eight weeks out and you'll look great come zero-hour. This is a time honored tradition and it works.

Then comes the counter reply flying back from dairy sympathizers...

"Ignorant meat heads! The bloat is intestinal, not subcutaneous – and then only among lactose intolerants. You're confusing the issue!"

The word "bloat" is clearly baffling you and the resulting "tradition" just perpetuates the ignorance. This bloating of which you guys speak is nothing but a misinterpretation of real information that someone has read concerning intestinal distress. Gassy side effects and abdominal distention (bloat) are temporary and have nothing to do with bloated skin. Lots of physique athletes drink some skim milk or have some cottage cheese right up to a competition. We shouldn't live on chicken breasts and broccoli alone for that long; those who try usually end up losing too much muscle as they diet!

Okay. I'm sure that there's even more dairy dissention out there, but these four disputes are enough food for thought. (I'm just presenting this parody as a neutral, omniscient narrator, of course.) Names and references have purposely been left out of this little exploration because no one wants grief for dramatizing valued beliefs and because we look forward to readers posting references or other evidence in the discussion to follow.

Over the years I've heard aplenty from every one of these arguments. I wonder what the majority of T-citizens, proper, think about each of these four dairy disputes. Based on this site's history, some strong opinions float around out there among you. Maybe some of them will show up here. 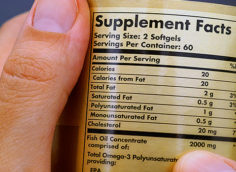 Every once in a while, someone says that fish oil doesn't work and the whole world gets suckered in. Here's where they get it all wrong.
Dietary Myth Busting, Good Fats, Nutrition & Supplements, Omega-3 Fatty Acids, Tips
TC Luoma August 19

Everything you need to know about hair loss, including what prescription drugs may be able to help.
Curcumin, Nutrition & Supplements, Resveratrol, Super Health
TC Luoma November 26