Long before 1904 when J.T. Stinson coined the legendary phrase, "An apple a day keeps the doctor away," apples have been a historic symbol of good health. In 1100 A.D the Medical School of Salerno taught its budding physicians about the benefits of apples when treating illnesses of the lungs, bowels, and nervous system.

But even before that, Homer reminisced about the apples in his orchard in The Odyssey:

"12 pear trees bowing with their pendant load,
and ten, that red with blushing apples glow'd". . .

All this extensive history alone ought to grant apples "power food" status, but we won't stop our look at apples with just that. To go along with their rich history, apples also have a rich scientific background.[1]

In looking at the benefits of having apples as a staple of your diet we'll look at three main areas: phytochemicals, carbohydrates, and satiety. Let's start with phytochemicals. The four main phytochemicals found in apples are flavonoids and phenols; quercetin, catechin, phloridzin, procyanidin B2, and chlorogenic acid. The antioxidant capacity of Vitamin C pales in comparison to the ability of these phytochemicals to quench free radicals.

Equivalent is the key word because vitamin C makes up only 0.4% of the total antioxidant capacity of an apple. Also, when compared to other commonly eaten fruits in the U.S. like bananas, oranges, strawberries, and pineapples (to name a few), apples have the second highest antioxidant activity (cranberries are first), so take that vitamin C!

The big antioxidant players are actually the phenolics – quercetin, epicatechin, and procyanidin B2.[2]

Yep. the antioxidant capacity of apples has been fully established as a force to be reckoned with. Back in the early 90's, Block et al[4] reviewed over 175 epidemiological studies and concluded that fruits and vegetables have a significant protective effect against many different types of cancer, such as colon, breast, esophagus, stomach... you get the point.

It's important to remember that not all antioxidants are created equal, especially synthetic ones. Vitamin C supplementation has not been shown to lower the incidence of heart disease, but flavonoids (from whole foods) and apple intake has been.

In the end, scientists think that it's the synergy of several antioxidants and phytochemicals that allows for the reduced risk of disease and not just one in particular. If you're not convinced about the "danger" of supplemental antioxidants then you need to read Dr. Lowery's article Evil Antioxidants.

When looking at the antioxidant make-up of apples, the next question that comes up is what kind of apple should you eat? After all there are over 7,500 known types of apples.

As seen in the bar graphs below from J. Boyer, Fuji and Red Delicious apples are tops for both phenolic and flavanoid content, but the popular Cortland and Empire apples fall on the lower end of the spectrum.[2]

The take hold message here is two-fold. First stop popping your 500mg tablets of Vitamin C for their antioxidant power and eat an apple. Second, apple variety makes a difference; mix up the type of apple you buy week to week to optimize the varying phytochemical benefits from the different kinds.

The next characteristic that makes apples a must have in the fridge is their carbohydrate make up. Face it, apples are great. They're inexpensive, taste great, they have a rock bottom glycemic index rating, and they're a good source of fiber. It's no wonder that when the devil tempted Adam and Eve he used this awesome fruit – who could resist?

Apples have a glycemic index rating of 38. [7] This coupled with their ease of portability, makes them the perfect anytime fruit, especially for people on the move.

If you're looking to abide by Dr. Berardi's 7 Habits of a Highly Effective Nutritional Plan, apples can be of great help.

A small to medium sized apple is the perfect companion to a protein + fat meal. The apple will usually give you only 10-15grams of carbohydrates (depending on the size), a couple grams of fiber (this will also help with satiety but more on that later), and it'll fulfill JB's nutrition habit #4" "Eat fruits and vegetables at any meal."

The Power of Pectin

The most notable fiber in apples is a soluble fiber called pectin. A medium apple has ~4 grams of fiber and a good portion of that is pectin. Pectin has been shown in several studies to aid in the lowering of LDL cholesterol levels.

In 1999 Lisa Brown, from the Harvard School of Public Health, led a meta-analysis of the cholesterol lowering effect of dietary fiber. It was reported from this an intake of just under 5 grams of pectin a day yielded a significant reduction in LDL cholesterol levels[8].

Pectin's power doesn't stop at lowering cholesterol levels. In fact there's good evidence that pectin can increase satiety and thus aid in weight loss. If you've been around T-Nation for a couple years, you may remember Dr. Lonnie Lowery's first "Down on the Pharm" article where he looked at the extraordinary benefits of fruits and vegetables.

In the section about apples, Dr. Lowery wrote "Three apples per day can result in significant weight loss over 12 weeks." This statement was referring to an article published in 2003 that compared the differences between groups that ate either 3 apples or pears a day vs. eating 3 oat cookies a day[9].

But the benefits didn't stop there. In addition to the decrease in weight, the people participating in the study that received the fruit also ended up having decreased blood glucose levels.

The weight loss that occurred in the 3-a-day apple study was not, surprisingly, due to a decrease in energy intake from the apple group. The researchers attributed this to the greater level of satiety caused by the apples.

A study using US Army employees found that only 5 grams of pectin was needed to significantly reduce that satiety of the people in the study[10]. Now you may be thinking, "That's great but the average apple doesn't have 5 grams of pectin." Not to worry. The subjects in the study were given a pectin supplement mixed with almost 15oz of orange juice.

I hypothesize that you could receive the same feelings of satiety with even a smaller dose of pectin, assuming you'rer eating a smaller glycemic load. An apple has a lower glycemic load than 15oz of orange juice. This reduced glycemic load will allow for better blood sugar control.

Since controlling blood sugar levels is an important aspect of satiety, it's safe to assume that by eating an apple you can receive the same increased level of satiety as shown in the Army study, even with the reduced pectin levels.

Apples are truly a low glycemic superfood that have an antioxidant punch to rival most fruits (and embarrass Vitamin C). Eating apples on a daily basis can help reduce your LDL cholesterol levels, blood sugar levels, and hunger.

Mike Roussell is a medical student at the University of Vermont. Mike also has a Bachelor's of Science in Chemistry (Conc. Biochemistry) from Hobart & William Smith Colleges. To contact Mike, send an email to [email protected] 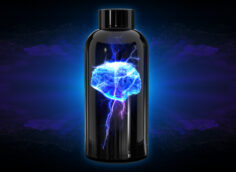 Characters in movies often drink some potion to give them superpowers. Well, here's a real-life potion that could give your brain superpowers.
Nutrition & Supplements, Workout Nutrition
John Romaniello October 1

Grass fed vs. corn fed, organic vs. natural, and wild vs. farmed. What should you be eating? Get the facts.
Diet Strategy, Feeding the Ideal Body, Nutrition & Supplements
Paul Apple August 2

Designing your own diet to get you healthy and lean is as easy as counting from one to eight. Here’s how.
Diet Strategy, Losing Fat, Nutrition & Supplements
Nate Miyaki November 2