Here, for your assimilation, are 10 nutritional sacred cows. They have been humanely slaughtered and skinned, their hides tanned with salt and then put out into the hot Colorado summer sun to dry, after which they were fashioned into hard, leather codpieces and distributed to mainstream nutritionists to help protect their balls from any additional kicks.

I see this all the time – health-minded people will rub seasoning onto a chicken, only to remove the skin before they eat it because the skin is deemed unhealthy. This makes no sense. This is like Buffalo Bill from Silence of the Lambs urging his captive, "It rubs the lotion on its skin," only to then discard the skin and instead use her liver to make a nice dress for himself.

The average piece of chicken skin only has about 50 calories, of which approximately 55% comes from monosaturated fat. You know, like olive oil. And yeah, the rest of the fat – about 2.5 to 3.0 grams – is saturated, which is a pittance. Besides, you need some saturated fat, at the very least to allow your testes to keep producing testosterone.

For years, well meaning but sadly mistaken cardiologists told us to avoid eggs because of all that cholesterol. Alligators in sewage systems everywhere fattened up on the seemingly endless stream of egg yolks that bobbed by, courtesy of all those people that dumped the yolks into their drains as they were preparing their sad little egg white omelets.

Luckily, that's all over. As I described in The Truth About Eating Eggs, you can eat 12 eggs a week (and probably more) without adversely affecting your cardiovascular system. Scientists tested serum lipids, plasma glucose, various markers of inflammation, levels of oxidative stress, and even adipokinectin levels of egg eaters and found no indications of harm.

They concluded that eggs were an "acceptable and convenient food source," so eat up.

No, not really. You know how this salt paranoia started? One researcher in the 1970's force-fed the human equivalent of over a pound of salt a day to a bunch of rats and they developed high blood pressure.

As I wrote in The Ridiculous Truth About Salt, "…eating over a pound of sodium a day would likely cause a human to develop high blood pressure. It would also cause his kidneys to explode out of his back and ruin the upholstery in his Volvo."

But I don't think anybody eats that much salt, so let's cast that study aside. Even so, very little subsequent research (on humans) backs up the connection between salt and hypertension. In fact, one huge study found that salt intake correlated negatively with death rate. In other words, the more salt people ate, the longer they lived. Still, a small percentage of humans are salt sensitive and need to be careful.

MSG, or monosodium glutamate, is a spice used not only in Chinese restaurants, but pretty much all over the world. Regardless, most people in the U.S. think it's some sort of slow-acting poison, the preferred choice of dowagers who slowly kill their husbands through spiked cups of tea.

The truth is, as I wrote in The Killer Chemical That's Good For You, MSG is found naturally in meat, fish, poultry, tomatoes, hard cheeses, and tomatoes, and even breast milk.

And rather than harm you, or cause Chinese restaurant syndrome, for which there is no scientific evidence that it even exists, MSG increases nutrient absorption and immune function. It also works better than salt in making food taste better. Sprinkle away.

While growing up in Detroit, I saw, almost on a daily basis, sugar addicts robbing people or stores for an angry fix of sweet, sweet sucrose. No. No, I didn't.

Let's all stop saying that sugar's addictive. People with true addiction suffer from behavioral control, dysfunctional emotion responses, and cycles of relapse and remission that often end in a horrible death.

With addicts, sudden withdrawal from their addictive drug of choice often results in anxiety, nausea, hot and cold flashes, and diarrhea. None of this happens with sugar. Taking sugar away from a sugar "addict" just makes them pouty.

Don't mistake ordinary cravings for true addiction. Yeah, genetically, we're programmed to like us some sweets (and fat), but don't tell a real addict that you're addicted to sugar; he's likely to jam his weathered and unsanitary heroin needle into your chest.

If "health food" people had a flag, there'd be a picture of a bowl of brown rice in the middle of it. I get it, because, conceptually, brown rice is nice. It's got some protein and fiber and it doesn't raise your blood sugar all that much.

None of this is true about white rice. Instead of putting a picture of it on their flag, health food people might put a pic of white rice on the back of their underwear, or on the bottoms of their socks, as a show of disrespect for white rice.

But the truth is, a bowl of brown rice doesn't have as much protein as even a morsel of chicken or some other meat. It has some fiber, but you get more from a serving of vegetables. The thing the health food people don't get about brown rice, though, is something called phytic acid, which is a chemical intrinsic to brown rice (and several other grains) that binds up minerals, in addition to inhibiting enzymes that we need to digest food in general.

And yes, brown rice causes less of an insulin surge than white, but who eats white rice by itself? It's usually eaten with meats and/or vegetables, thus negating its insulin-raising effects.

White is better for athletes. It digests easily, isn't known to cause any food allergies, and it's almost always fortified with vitamins anyhow.

Sure, pink salt and other trendy varieties of sea salt may contain a few more nano particles of elements like calcium, iron, copper, and a few others, but the amounts are negligible. However, as I explained in Your Fancy Pink Salt is Worthless, if you're depending on sea salt to fulfill your daily requirements for certain minerals, you're not a human – you're a flounder.

More importantly, though, is that sea salts, ironically, are lacking in iodine, an essential human nutrient. Thankfully, the Morton Salt Company started adding iodine to its table salt in 1924 precisely to provide this much-needed supplement to humans. As such, regular iodized table salt is a lot healthier than pink or other types of sea salts.

People continue to be hung up on what they regard as "natural" foods while eschewing the "artificial," but the difference between the two is often a matter of perspective.

As I explained in the elegantly titled Get Your Head Out of Your Science Butt, there's no difference between a chemical that comes from some fern growing in Guatemala and one produced in a lab.

More importantly, everything is made of chemicals! Consider those little candy hearts little kids and romantic saps hand out on Valentine's Day. They're hardly anyone's idea of a health food, but they only contain 14 ingredients, many of which, like sucrose, stearic acid, amylose, and amylopectin, are found in fruits. Some brands even contain the super ingredient curcumin.

Now contrast that with the following list of ingredients:

Horrible, isn't it? No doubt it's from some boxed Frankenfood insidiously constructed to appeal to every craving for fat, sugar, and salt that we have, right? Nope. It's the list of ingredients from a strawberry. Now go hang your head in shame from indiscriminately picking on chemicals.

Virtually every no-necked guy believes that eating a steak or some other red-colored piece of protoplasm connotes special strength, and they even use it against already downtrodden vegetarians to "prove" that they're pantywaists.

But it's all placebo. Yes, meat has heme iron, which makes hemoglobin, and some B-12, but you'd get more from eating a handful of raisins and a bowlful of magically delicious Lucky Charms. And while red meat contains creatine, you'd have to eat two or three 20-ounce Melbourne steaks from the Outback Steakhouse to get a measly 5 grams of creatine, which is what you get in an itty-bitty scoop from a bottle of creatine powder.

Red meat contains some zinc, too, which is necessary for the production of testosterone, but even something like duck meat has more. No one seems to go around saying they feel stronger after eating duck, though, with the exception of Elmer Fudd.

Sadly, if steak makes you stronger, it's because, oddly enough, eating red meat is regarded as manly and if you think you're manly, you are... at least until some real shit hits the fan.

As I explained in Tom Brady's Diet is Way Stupid, having a drink of milk doesn't automatically make you start coughing phlegm balls, like some Deadpool-esque supervillain.

Researchers proved it. They gave 125 people either cow's milk or soymilk and disguised it with chocolate mint flavoring. Both groups swore their tongues felt like they'd licked a banana slug, but regardless, neither drink affected sinus congestion, breathing, coughing, or postnasal drip.

As far as the alleged dairy/cancer link, blame it on that annoying China Study. It said that dairy, and specifically the milk protein casein, causes cancer. In addition to cherry picking their results and conclusions, it seems odd that casein, a major component of human breast milk (along with the milk of most mammals) would cause cancer. Why would Mother Nature make such a major blunder? Short answer, she didn't. 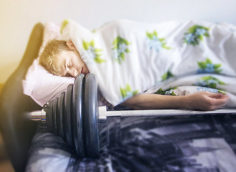