Several news aggregators have recently picked up the results of a new study published in the “Journal of Nutrition.” The study suggests that eating just one cup of leafy vegetables a day could boost muscle function and strength, courtesy of the nitrates they contain.

The researchers examined the data from the diets of 3,759 Australians over a 12-year period. They found that those with the highest regular nitrate consumption (through consumption of leafy vegetables) had 11 percent stronger lower limb strength than those with the lowest consumption of nitrates. The salad eaters were also able to walk 4% faster.

And all of this occurred independently of physical activity levels.

It’s the kind of study news sites love – evidence that a simple, low-effort dietary modification leads to demonstrable, click-generating benefits. The study might lose a little bit of sheen, though, when you note that the participants were non-athletes and their baseline age was 48.6 years, +/- 11.1 years.

Most of us would probably hope the study showed that younger athletes increased their strength by some impressive percentage by eating a simple salad – not just some Aussies on the verge of codgerdom.

Luckily, there are also a number of previous studies – many involving athletes – that have shown the benefit of ingesting dietary nitrates – mostly through beets – for strength and endurance.

The collective evidence is strong enough to suggest that, as the current study suggested, regularly eating a bowlful of leafy vegetables really could have ergogenic effects on younger athletes, too. Further, the effect could be substantially enhanced as long as they made one minor dietary adjustment, which I’ll reveal later in this article.

Why Do Nitrates Increase Strength and Endurance?

Let’s be clear: nitrates, by themselves, don’t have any beneficial effects on human performance. To work, the body first has to convert them to nitric oxide, a chemical that helps increase blood flow to muscles (and your penis, BTW). That in itself might help muscles by reducing how fast they fatigue. 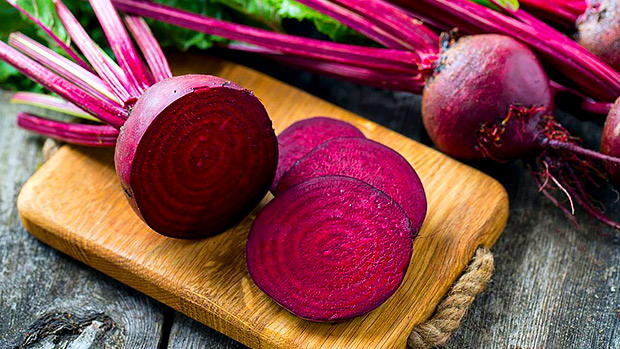 Arugula is a nitrate powerhouse. Too bad nobody eats it. Some less powerful but more palatable alternatives include cabbage, kale, spinach, and Swiss chard.

While beets aren’t a leafy vegetable, they rank nearly as high as leafy greens in their nitrate content. That’s why a lot of previous research on dietary nitrates involved Dwight Schrute’s favorite tooth-staining vegetable.

So yeah, a simple spinach salad, topped off with a couple of slices of beets, could measurably improve athletic performance. The convenient thing is that you probably wouldn’t have to eat such a salad immediately before a workout or athletic event because it looks like that elevated blood nitrate level persists – as long as you feed the body a steady supply, i.e., eat at least one such salad a day.

What’s That One Minor Dietary Adjustment I Need to Make?

Here’s something none of the salad/beet nitrate researchers, as far as I can tell, have considered: The effectiveness of any high-nitrate leafy vegetable is hugely dependent on how well you chew it.

You’ve got bacteria in the back of your mouth that convert the nitrates in your food to nitrite, which are then absorbed by the salivary glands and converted to NO by the body. You might assume that this is some trivial factoid, but up to 25% of the nitrate in circulation is absorbed through the salivary glands.

I’m absolutely convinced the average meathead is leaving the vast bulk of his nitrate change on the floor (along with a plethora of other vitamins, minerals, and phytochemicals) by not chewing properly. Hell, anacondas chew more than the average male.

Need proof? A survey of 1,000 people in Britain found that the average Brit chews their food six times before swallowing it. Granted, the survey was taken at British Subway sandwich shops, so the haphazard chewing might have just been a self-preservation tactic, an effort to slip the food by their taste buds before they realized what was happening. Regardless, the findings should resonate anyhow.

Eat a leafy salad every day. It doesn’t have to be big, and it doesn’t have to consist of arugula or kale; spinach will suffice. It should result in demonstrable athletic benefits and improve a number of health parameters in general.

And definitely remember to chew before swallowing, at least 15 to 30 times per mouthful.