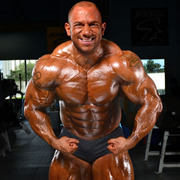 Amit Sapir was born in Israel but he was raised on T Nation. He's been a member since T Nation launched in 1998. Amit has gone from knowledge hungry teenager, to soldier, to qualifier for the 2004 Olympic Games in weightlifting, to IFBB pro bodybuilder. That's why we're glad to have him on the Biotest training team. He's the real deal. Follow Amit Sapir on Facebook