A penile fracture isn't the worst thing that could happen to a man, but it's gotta' rank in the top five, for sure.

Long thought to be a myth, a tale told in between bong hits by college students, penile fractures are unfortunately a real thing and I've got a theory that weightlifters might be particularly vulnerable to this awful medical condition.

In medical terms, a penile fracture is a "corpus cavernosa rupture," and it almost always occurs from over-exuberant or even acrobatic sex.

What happens is that, while in the grips of passion, you momentarily lose control and pretty much "miss your target," and instead of thrusting into a vagina or some other designated bullseye, you throw a powerful penile punch into a woman's pubic symphysis, the perineum, or even a marble counter top.

This errant stroke puts a tremendous amount of pressure on the tunica albuginea, which is the external envelope surrounding the blood-engorged corpus spongiosium. The pressure is too much for the envelope and it ruptures, either on one side, or in rare instances, both sides.

This event is characterized by a triad of symptoms starting with an audible crack, and followed by a subsiding erection and pain... lots of pain.

This condition requires surgical "exploration" and "corporal repair," which often leads to a complete recovery if tended to quickly.

While penile fractures have likely plagued man since he first sprang a boner, the first one wasn't described in medical literature until 1924. Even though they're still relatively rare, reports throughout the world are increasing.

Oddly enough, the world leader in reported penile fractures is Iran, where 172 cases have been reported in 9 years, all from a single province. Only 8% of patients claimed that their injuries stemmed from sexual activity, though. One man claimed to have been bit by a donkey. Another claimed to have fallen off a mountaintop onto his erect penis, while another blamed a brick.

Brazil has also reported a significant number of penile fractures, but luckily for sexual traditionalists everywhere, most of their cases were from sex between two people.

I've a sneaky suspicion, though, that weightlifters are particularly vulnerable to this horrible injury.

You don't need me to tell you that lifters are a showy bunch that yearns to display their strength and physicality.

Then there's all that exercise equipment with its siren call to the kinkiness of many lifters. You damn well know there isn't a Swiss ball in a private residence that hasn't been used for intense, bouncy, penile-fracture inviting sex. The same goes for the elliptical trainer, the knobby foam roller, or mom's thigh blaster (you sick bastard).

Hell, even if you don't engage in Flying Wallendas-type sex, there are fairly conventional sexual positions that can cause injury if one or both partners aren't careful. Here are a couple of the most dangerous ones:

The vast majority of reported cases arose from women-on-top positions. This is potentially problematic because all of the woman's weight is on top, and to be frank, most women haven't had the years of practice you have in hitting a target.

Besides, hitting a dart with the board is a lot harder than hitting the board with a dart.

Far be it for me to recommend missionary style, but only 21% of penile fractures occurred from that position. Perhaps the best advice is to avoid sex where you might lose your balance. Stay away from doing it on exercise equipment, too.

May your aim be true. 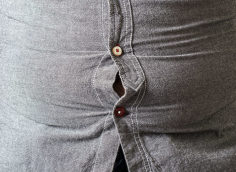