People who work out have more sex. This is according to a study published in The Journal of Scientifically Obvious Facts That Are Politically Incorrect But Totally True Even If It Hurts Your Feelings. (Shugart, et al. 2016)

But besides making you more physically attractive – or at least less gross from the neck down – is there something else going on? For example, does the smell of male sweat cause women to get aroused? Scientists have actually been looking into this.

Women do appear to be sensitive to male pheromones, particularly around ovulation, at least if they're not using sexually-blunting oral contraceptives.

The Journal of Neuroscience reported a study where women smelled swabs of androstadienone, a constituent of sweat, and a placebo. Researchers measured body temp, skin conductance, pulse, blood pressure, respiratory function and cardiac rate. Those women who took a whiff of androstadienone displayed more signs of sexual arousal. It even put them in a better mood.

But not all male pheromones are the same. For example, the pheromone androstenone isn't the same as androstenol. Fresh man-sweat produces a scent of androstenol, which is attractive to women. But after 20 minutes or so, that sweat gets oxidized. Now it's just body odor. So, fresh sweat good, old sweat bad.

Men with higher levels of testosterone give off more of these pheromones. So it's possible that fresh sweat from a low T male isn't as arousing as that from a high T guy. Also, the oxidized sweat of a high-testosterone dude probably smells worse.

Add to this the research showing that only about 70 percent of men and women can detect these chemical signals. Thirty percent smell nothing, possibly because of a missing gene. Based on DNA samples, those who can smell androstenone were found to have genetic variations in a single odorant receptor called OR7D4.

Furthermore, the power of these pheromones may only work at very close range. One experiment showed they can only be detected at a distance of around 18 inches.

And here's another weird one. Half of the female test subjects in one study were asked to wipe their upper lips with cotton pads soaked in the sweat of nursing mothers. (The placebo group did the same but with benign smelling pads.) Those given the sweaty pads of breast-feeding mommies reported a 42% increase in desire for their hubbies and boyfriends. Single women reported more sexual daydreams.

Could it be that the scent triggered primitive breeding instincts? Seems that way.

Here's another possible reason that sweating, or the result of frequent exercise that causes sweating, may trigger female arousal. Males who burn 200 or more calories a day by exercising reduce their chances of impotence. Exercise also decreases stress, which contributes to erectile dysfunction and infertility.

Behavioral ecologist Fhionna Moore concluded that women prefer men with low levels of the stress hormone cortisol. Instinctively, females seem to know that high-cortisol men have suppressed reproductive function. Not an attractive sign that a man would make a good baby-maker or provider and, like it or not, the base functionality of our brains still operates at that level. Sorry, feminists.

See, much of what we think of as "attractive" is rooted in rather primitive-sounding mating signals. Certain physical features we think of as "hot" are actually just fertility indicators: youth, full breasts, a muscular male butt (really, this has been studied), etc.

So it's possible that women are unconsciously attracted to men who sweat through exercise because it signals to them that these guys are less likely to be impotent and would make better candidates for pair bonding and procreation.

Studies on perfumes and colognes generally show they have no real effects on the opposite sex. But they do have an effect on the wearer. If the scent makes the man or the woman feel sexier, he or she will behave differently, consciously and unconsciously.

A woman who wears a scent that makes her feel sensual may act sexier, indirectly increasing her attractiveness. The same could be said about man-sweat. If you think your fresh sweat turns women on, you may act more confident and sure of yourself, which does turn women on. 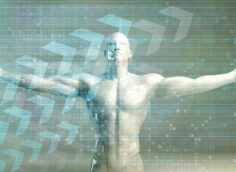 One study says we ingest the equivalent of a credit card every week. Here are some things you can do to make yourself safer.
Health & Longevity
TC Luoma December 7