These are chemicals in the environment that mimic estrogen. These chemicals, mainly heavy metals, synthetic chemicals like DES and DDT, and industrial chemicals like phthalates, grow in number, and accumulate in more tissues with each passing year.

To avoid these nasty chemicals, do the following:

Still, you generally don't want too many of them around as they resemble estrogen molecularly and can act like the real deal. Phytoestrogens are also found in various foods, but most notably in soy and soy protein. Avoid them.

Studies show that telling others about your goals makes you less likely to achieve them. Here's why, plus a better method.
Opinion, Powerful Words, Strong Words, Tips
Chris Shugart December 19 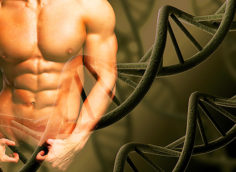 Does the eat-big-train-hard lifestyle shorten your lifespan? That's what some people say. Here are the facts.
Health & Longevity, Living Better
TC Luoma October 5