You've no doubt heard the phrase, "grower or shower." It's sometimes used to explain a locker room disparity in penis size among multiple men.

Of course, you'll almost never hear a "shower" use the term. It's used almost exclusively by "growers" and almost always defensively, usually after emerging from old man Swanson's pond where they and the other boys and girls on the yearbook committee went skinny-dipping that one June night.

They'll shout out something like, "I'm a grower!" or "The water's cold!" but to no avail, because most women don't understand the mysteries of the penis.

They assume that what they see in a man's relaxed state is what they might get in the bedroom. The kind ones will tell you it doesn't matter while stealing furtive glances at the showers and the really kind ones will keep you in their prayers.

Oddly enough, most men don't understand this particular aspect of male physiology, either. The "showers" assume the phrase is just something men with small penises latch onto to protect their self esteem, the same way bald guys will sometimes assert that they have higher testosterone levels than guys with hair.

The growers, however, know that their expansive powers are considerable, but part of them still assumes they're penile midgets compared to the showers. The truth is, the growers have nothing to worry about and the explanation for this apparent disparity lies not only in their genes, but their jeans. 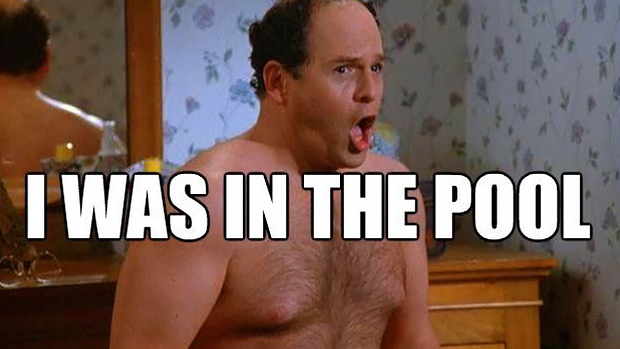 It turns out that the term "growers or showers" describes a real phenomenon, the reason for which reveals itself at the molecular level.

We first need to note that the penis is comprised of three fibrous "cylinders," each of which, when aroused, fills with blood to construct an erection.

These cylinders themselves are comprised of a fibrous weave of collagen and elastin, two compounds that give the erect penis its unique combination of rigidity and flexibility. However, the ratio of these two substances varies greatly from man to man.

Growers are simply smaller out of the bedroom, but in the bedroom, they're just as big as showers (unless you're talking about the rare, porn-star freak. In that case, all bets are off).

The grower's penis may expand 3 to 5 times its normal size while the shower's penis might only double in size. Furthermore, growers are much more sensitive to shrinkage, aka "the George Costanza syndrome."

It's as simple as that, so the showers out there can wipe that smug look off their faces.

Related:
Take This for Sexual Health

Related:
What Erections Tell You About Your Health

Tired? Getting fat? Having issues in the bedroom? Here's everything a man needs to know about hormones, drugs, supplements, and his willy.
Living Better, Pharma, Testosterone Optimization, TRT
Dr Jade Teta November 9

Like it or not, the truth is that successful people just work harder than less successful people. So drop the excuses, stop blaming others, and get to work. Here’s some motivation.
Motivation, Opinion, Powerful Words, Strong Words
Matt Kroc March 3

Are you trying to make progress or get attention? There is a difference and you need to know it.
Blogs, Opinion, Strong Words
Dani Shugart June 4