The Belarusians, by most accounts, are the biggest drinkers in Europe, but that's understandable because the government doesn't allow them to pursue happiness and all that good stuff. That makes them bored and frustrated, which leads them to drink. Plus, living a healthy lifestyle just isn't very popular there, so telling Yuri to set 'em up again and again is a common occurrence.

The Moldovans place second in alcohol consumption and that's understandable, too, as they’re considered the unhappiest country in the world. Their biggest source of pride is that they have a lot of nice fruit, which is hardly enough to lift your spirits on a daily basis.

Somewhere in the subsequent rankings, either third or fourth, are the Finns, but they seem to drink for an entirely different reason – they just plain like it. (I'm a Finn, so I have some expertise in this matter.) As such, it only makes sense that they'd come up with a cure for hangovers, or should I say an alleged cure for hangovers.

A recent study conducted at the University of Helsinki, the results of which were picked up and trumpeted around the world by the lay press, concluded that taking the amino acid L-cysteine after an evening of heavy alcohol consumption effectively eliminates hangovers.

Did the Finns really do it? Did they find a way to ease the suffering of millions of binge drinkers? Maybe. Let's look at exactly what they did and what they found.

Before we look at any study protocols, results, or interpretations, I need to point out that Catapult Cat Oy, a company that makes the L-cysteine supplement used in the study, funded the researchers. That doesn't necessarily negate any results, but it gives a good reason to keep one eyebrow arched while interpreting them.

So yeah, the study. They recruited 19 healthy male volunteers to drink 1.5 grams of alcohol per kilogram over three hours (about 4.8 ounces for a 200-pound man).

(A number of women expressed interest in participating, but it didn't work out. One of them failed to show up after the first session. Three had zero response to hangover symptoms in all three sessions. One was "participating at different stages of the normal menstrual cycle," and another was on long-term steroid treatment and had nausea before the drinking even began.)

The study was randomized, double blind, and placebo controlled. All 19 men, during three separate sessions, randomly swallowed 6 placebo tablets, 3 placebo plus 3 L-cysteine tablets, and/or 6 L-cysteine tablets. On each occasion, one capsule was taken 15 minutes before 7, 8, 9, 10, 11, and 12 PM on 6 consecutive Friday nights (even though the drinking was completed after only three hours).

Each capsule contained 200 mg. of L-cysteine, so those at the top end were ingesting 1200 mg. of the amino acid.

The next morning, the men who took the 6 capsules of the L-cysteine supplement experienced less alcohol-related hangover symptoms (nausea, headache, stress, and anxiety) than those taking 3 capsules or those taking placebo.

Additionally, the men taking the largest amount of the supplement reported less of a desire to drink, which, if true, could have huge implications in reducing the risk of alcohol addiction.

Let's Peek Under the Sheets

The researcher didn't find that the supplement cleared alcohol out of the system any faster, but it did help eliminate acetaldehyde, an alcohol metabolite responsible for many of alcohol's harmful effects.

Still, the study was a little whacked. Here's where that arched eyebrow comes in handy. If you read the liner notes, you see some weird things, some even comical. Some of the participants weren't able to drink up all the alcohol prescribed. Some had such a "high tolerance" to alcohol that they experienced no hangover at all.

Others were excluded from the final results because they left the research session and went to the bar, where they continued drinking. Oy.

Secondly, the L-cysteine supplement also contained thiamin, riboflavin, niacin, pyridoxine, biotin, folic acid, cobalamin, and vitamin C. Who's to say that the alleged beneficial effects of the supplement weren't at least partly caused by the B-complex and vitamin C co-hosts?

Lastly, the researchers used a mixer of lingonberry/black currant juice, both of which are rich in polyphenolic compounds that could have further mitigated the effects of alcohol.

To really draw the conclusion that L-cysteine reduces or eliminates hangover symptoms, you'd have to do the same experiment (hopefully with test subjects that were a little more committed) using only L-cysteine, not a nutritionally complex matrix of vitamins and polyphenols.

Still, L-cysteine is cheap and if you're a drinker prone to excess and suffer from accompanying hangovers, it's worth a try. Solgar makes a solid L-cysteine supplement. Try taking one 500-mg. capsule just before you start drinking, one in the

The older and wiser you get, the more you start to realize there are certain "universalities" common to successful outcomes in all of life's endeavors. These realizations are as certain as the law of gravity, albeit less obvious. You should know and understand these common threads because they make success less random and more predictable.
Opinion, Powerful Words, Strong Words
Charles Staley May 21
Testosterone is hot. It gets lead story status in big-name international newsmagazines like Time, and it's been making the rounds on both national and local news programs. Everybody, it seems, is suddenly intrigued by it. And moreover, everybody seems to want it.
Living Better, Pharma, TRT
TC Luoma June 26 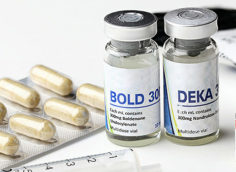