I just saw a new Planet Fitness ad that features a computer-drawn silhouette of a man with a "dad bod." It has thin arms, non-existent traps, the lat spread of a pool noodle, and a soft, doughy waist. He looks like, well, Dad, or just about any guy you see standing in line to get a Tastee Freez.

At the top of the ad are the words, "Dad Bod: The New Shape of Sexy." The drawing is surrounded by various factoids meant to support its befuddling headline: 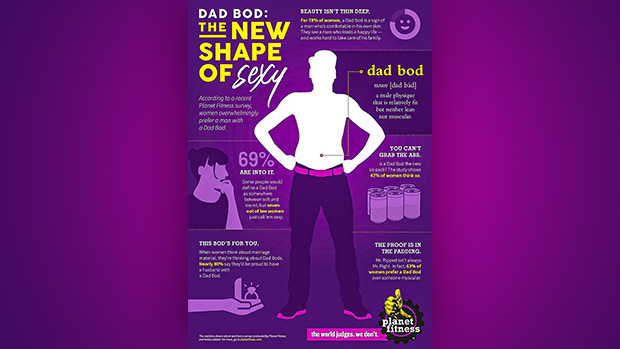 From a marketing standpoint, this ad is probably pretty effective. Planet Fitness has always championed physical mediocrity and tried to ameliorate any insecurities members or potential members might have about their bodies.

It's sort of like having a book club that discourages anybody who can read beyond a 5th-grade level from joining: This month's choice: "Charlotte's Web." Spoiler alert! The pig can talk!

As a business model, it appears to work really well for them. Just don't count on Planet Fitness's members coming to the rescue if aliens from another, less dad-bodish planet attack.

But forget that. Forget them. What I'm interested in is whether their factoids are accurate. Do women really desire men with bodies that are emblematic of sloth?

Girls Only Want Boyfriends Who Have Great Skills. – Napoleon Dynamite

It does look like a lot of women today aren't much interested in traditional masculinity anymore. Oh, many still like the occasional Chris Hemsworth or Idris Elba, but women's tastes increasingly seem to lean towards Korean boy-band types like the members of BTS or, as Planet Fitness contends, dad bods.

Somewhere along the way, a couple of the categories in Abraham Maslow's hierarchy of needs appear to have gotten slightly upended. Oh, women still want safety and food, water, and warmth, etc., but how they play out has been changed.

In America, most women don't need men to fulfill those needs, thank you. They have virtually equal employment opportunities, and the police and legal system provide a reasonably adequate source of protection.

So who needs broad shoulders? Who needs strength? Who needs the nunchuck skills and bow-hunting skills that Napoleon Dynamite thought were crucial to acquiring a girlfriend? Yep, Darwinian theory has been sent packing, its possessions having been tossed out the apartment window into the street below while it tries to dodge a thrown flowerpot.

Back in 2002, research psychologists at the University of St. Andrews in Scotland gathered together 34 female "raters" to determine the ideal male face. Their creation had big, doe-like eyes that were "expressive." He had a smooth-skinned symmetrical face with a straight nose and rounded hair and jawline. He looked kind of like Dove Cameron.

"Smooth skinned and feminized looks are characteristics of youth. It's possible these looks stimulate not only sexual but also maternal feelings. If women want to be more dominant, they will look for a little boy face."

That still appears to be true, but what women seek in a man has "evolved" even further – they now want to mother a soft body that goes along with that little boy face.

America's Fastest-Growing Game Show – Who Would You Do?

A few years ago, I decided to conduct a crude test of this theory. I printed off two pictures, one of George Clooney who, at the time, was considered to be the epitome of masculinity, and the other of then smooth-skinned Brad Pitt. I then conducted an informal poll of a number of local women. 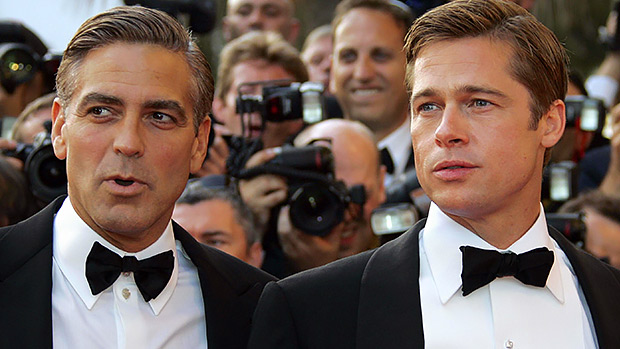 For starters, I asked several American women between the ages of 20 and 40 – all career women – which face they thought most appealing, and 5 out of 6 chose pretty boy Brad Pitt. I also polled a few over-40 women, most of whom were housewives. Four out of 5 chose George Clooney.

While my "study" was decidedly unscientific, the results fell in line with some of what the Scottish study inadvertently predicted. The over-40 women who were brought up with traditional views of masculinity preferred the chiseled looks of George Clooney, while the younger women, raised in an age of equal opportunity and female superheroes, chose baby-faced Brad Pitt.

However, when I asked 5 Brazilian girls – all under 30 and all recent immigrants – which they preferred, 4 of 5 chose Clooney.

Brazil still has very traditional views of masculinity. Machismo is as part of the norm as is soccer or Samba. The Brazilian girls still harbor those traditional notions of what constitutes a worthy mate: the ability to protect and provide. They were attracted to someone who looked the part.

But I also showed all the women a picture of a rugged-looking bodybuilder who was muscular but not overly large. The physique represented what most young men would consider ideal: moderately big, ripped, and powerful looking. It was a look that most men think would appeal to women.

Sure, that's why a lot of men work out in the first place, to build muscle to attract women. Uh, not so fast, Meat. My results didn't exactly agree with our assumptions.

Before I give you my results, though, it's best if we first look at another, more professional study that was also designed to determine if there's a disparity between what type of body men want to develop and what type of body women actually prefer.

The 4 Cabana Boys of the Apocalypse

Back in the early 2000s, a group of college-aged men were shown a male image on a computer screen and asked to manipulate it so the image would represent what women considered the ideal male body. Most of the men added 20 to 30 pounds of muscle to the figure.

When women were asked to manipulate the same image, they didn't add any muscle. None at all. Their ideal image didn't look quite as sad as the Planet Fitness silhouette, but he certainly didn't look like a weight lifter either.

They more closely resembled a Timothee Chalamet, a Nick Jonas, or a couple of those geeky-looking kids from the cast of Stranger Things, aka the Four Cabana Boys of the Apocalypse. In fact, the results meshed quite well with the Planet Fitness ad described at the beginning of this article. (Although to be fair, the waistlines of at least the first two cabana boys listed above don't appear to have yet oozed into dad-bod territory.)

It's like a modern-day Chekhov story where you sold your cherished collection of Star Wars figurines on eBay so you could afford to buy your fiancée a wardrobe of Lululemon workout clothes, not realizing she had already canceled her gym membership so she could buy you the rare vinyl-caped Jawa figurine you needed to complete your Star Wars collection. Or something like that.

And my little poll didn't do much to dissuade the findings of that professional study. The American women over 40 found the physique picture "disgusting," "overblown," or "unappealing." Almost all the American women under 40 thought the same things, a couple adding that time-worn but still really annoying cliché, "Anyone who spends that much time on his body isn't going to have any time for me."

The over-40 women, despite having traditional views of masculinity, didn't have any familiar frame of reference regarding the muscular body other than movie stars. Certainly the boys they went to school with didn't look like that. And the younger women couldn't conceive of mothering something that looks like it was born of a crocodile and a pit-bull.

Likewise, almost all the Brazilian women furrowed their brows and shook their heads at the muscular pic. 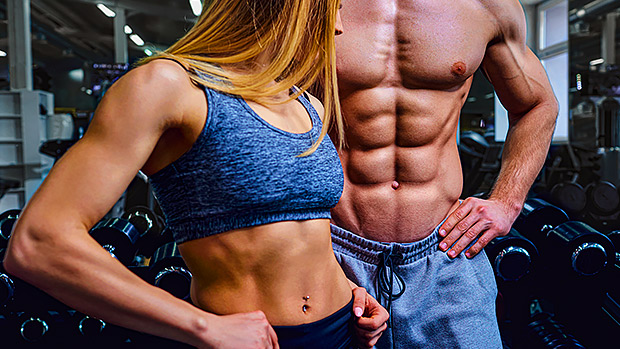 Don't Worry, Your Convictions Are Safe

All is not lost, though. I left something out of my report. The women who I noted were the most flirtatious, the most flamboyant in dress – liked the muscular physique in the picture.

I also polled another group that I didn't mention: Women who were into fitness and work out. They were all over the muscular body. Their firm buttocks practically quivered.

And while my "study" sure as hell didn't take into account whether the females were ovulating, studies show that women who are ovulating often tend to prefer roguish, more masculine males, while those who aren't sometimes prefer the emo-boys who can lactate when called upon.

Good, healthy, masculine genes are still coveted, but once the uterine field's been plowed and seeded, many women want a good, conscientious male nanny to nurture the baby crop.

So hormones apparently still play a role in the laws of attraction. Women who appear to be more interested in sex or those who are deeply in tune with their own physicality seem to be drawn to strong physiques.

It seems that despite social conventions, despite societal and historical influences, biology still trumps sociology, at least in some situations. So don't worry. Keep working out. Your convictions are safe. There are plenty of women who find the anti dad-bod extremely appealing.

And even if many don't, what the hell, there are plenty of other good reasons to build a strong, muscular body.

(Special thanks to the book, "The Future of Men," by Marian Salzman, Ira Matathia, and Ann O'Reilly for many of the facts in this article.)

Who are the most annoying people in the gym? Check out this gym owner's vicious (and funny) list.
Opinion, Strong Words
John Romano July 7

You hear these words all the time, but do you even know what they really mean? It's time to stop it with the nerdy buzzwords and go back to basics. Start here.
It Hurts Fix It, Mobility, Opinion, Training
Dr John Rusin August 27

Here's one of the most important benefits of training that many people overlook.
Opinion, Our Opinion, Powerful Words, Strong Words
Jason Ferrugia May 15