It happened exactly two months after having my left knee replaced. The surgery was the arthritic conclusion to a football injury I suffered in high school, and for the first time since having my knee cut open like a melon and replaced with a new, metal and plastic melon, I was feeling pretty frisky.

I was doing some rehab on a treadmill, walking fast, but just as my left leg stepped forward, the treadmill stopped, and I'm not talking stopped as if some clumsy cleaning woman had tripped over the power cord – it stopped abruptly, the way a bicycle wheel stops when the neighborhood bully shoves a stout stick into the spokes.

My freshly glued, nailed, and stitched knee and its thousands of already aggravated nerve endings had to absorb all that compressive force. The pain was... immense.

With jaws clenched and eyes watering, I looked behind me and saw that one of those flaccid, oversized medicine balls had rolled against the back end of the treadmill and gotten partially sucked in underneath it, bringing the machine to a sudden and unfortunately timed halt.

The ball had gotten away from some CrossFit boneheads who were now flailing away at their battling ropes, unaware their negligence had had any repercussions.

This incident set my recovery back several weeks, but it also turned me evangelistic in my zeal to get these CrossFit people and their HIIT and functional training sympathizers, out of my gym. That's right, I'm a gym segregationist and I want these people to go back to their "boxes."

And it's not just because they messed up my knee. There are plenty of reasons for them to crawl back from whence they came. But really, it's for their own good. After all, wouldn't they feel more comfortable with people of their own kind?

I should say, though, that a lot of these idiots probably aren't even CrossFitters, but CrossShitters – people who've seen it on the internet and are trying to do it in a regular gym. Regardless, I'm going to group the CrossFitters and Pretend CrossFitters together in this article and hope the legitimate ones can take the criticism with a grain of salt.

After all, some of my best friends are CrossFitters.

The Pretend CrossFit Model is Unsustainable

CrossFit is kind of an insult to traditional lifters who really love the activity of lifting. They enjoy learning about what they do and consider lifting a life-long journey. Contrast that with CrossFitters, many of whom won't be CrossFitting in 10 years.

I'll draw you an analogy. Traditional weightlifters are, let's say, like guys who love sailing. They delight in knowing how much and how fast to pull on the kite halyard so that the wind catches the spinnaker at just the perfect angle, sending the boat skimming across the lake while reveling in their knowledge, expertise, and the sheer delight of feeling the wind blow back their hair.

CrossFitters? They're the guys who outfitted a 12-foot skiff with a Dodge Hemi engine and use it to blast straight across the lake at 80 knots, barely able to control their craft and terrorizing swimmers, kayakers, fish, and the loons, my god, the loons, and finally crashing against the rocks on the far shore, stumbling out of their broken boat and feeling proud of the nasty cuts on their foreheads and their dislocated shoulders.

They may wreck a few more boats, but they won't learn anything about actual sailing and they'll move onto something else when they get bored.

That's most CrossFitters. After all, getting easily bored is one of the main attractions that drew them to CrossFit in the first place, but my gym isn't a place for you to try out new hobbies.

I catch gym newbies watching some of these guys with adulation. After all, the CrossFit guys are doing stuff that often looks impressively athletic, and they don't rest much, causing them to sweat like farm animals.

It naturally looks a lot better than some guy sitting down for 2 to 3 minutes and studying his footwear in-between heavy sets of squats.

But much of what these faux-CrossFit guys are doing is just flailing about, randomly doing sometime questionable exercises with unplanned and inexact levels of volume, intensity, rest, and technical complexity, ever striving to reduce the amount of time it takes to do the workout.

Take kipping for example. Looks kind of impressive, right? It shouldn't. Remember when your favorite uncle used to come over and "grab" your nose and show it to you? He didn’t really have your nose, did he? Kipping is like that. It's just a stupid trick.

Do pull-ups like a weightlifter, not some frightened chimp trying to escape a lion that's trying to bite his bottom.

When I watch people doing CrossFit-like workouts, they rarely show any joy, but there is a disproportionate amount of chest puffery. Look, you just did a workout of the day devised by someone else, a faceless entity hiding behind a keyboard. You jumped some rope. You jumped on and off some boxes. You slammed a medicine ball against the ground. Your form largely sucked. And then, like the Lion King, you gazed out over the landscape, master of all you see.

But tell me, hakuna matata boy, how is this different than a kid in a progressive nursery school?

And I got news for you. Anybody can perspire, but you guys wear your gamey sweat like you just won the Pythian games at Delphi and were crowned with a wreath of laurels. You got sweaty. Get over it. Anybody can exude liquid.

They Take Up a Disproportionate Amount of Gym Space

CrossFitty women (and some men, too) have invaded regular gyms and claimed large swaths of space in free weight areas where many don't use any weight at all and instead do air squats.

Of course, it could be that they're actually students of French mime and they're merely pretending to lift weights. I'm sure if I watched long enough I'd see them miming the iconic, "woman trapped in a box."

These same people sometimes even spread out speed ladders in the free weight area and prance back and forth as if they were trying out for JV football, dreaming of playing in the big game against Hoover High.

Other times they're like the Nazis in WWII, blitzkrieging from one gym area to the next in search of exercise lebensraum, attaching their ridiculous battling ropes to any stationary object they can find, be it the squat rack or bench press some weightlifter is trying to use, or even some old guy who nodded off between sets.

This forces serious lifters to have to navigate ridiculously long routes around the gyrating ropes, sometimes having to bivouac and rest up before completing the journey to the squat rack.

If the only equipment you're using is a speed ladder and some ropes, stay home and use your driveway.

They Kneel Before the Black Monolith

I swear, the first time I walked into my gym and saw one of those black vinyl-coated boxes that CrossFitters use to practice their ballistic jumps, I thought it was the black monolith from "2001: A Space Odyssey."

And then I got really weirded out when I saw a femur bone go flying up end-over-end. The bone wasn't thrown by a furry little hominid, though. Instead, it had burst through the thigh of some stupid CrossFitter who was using overly high box jumps as a conditioning tool.

Week after week, these wanna-be kangaroos keep making their boxes higher and higher, until their form invariably breaks down and they blow a tendon or, worse yet, send the aforementioned femur bone flying.

As T Nation author Eric Bach explained in Stop Doing Box Jumps Like a Jackass, using box jumps as a conditioning tool causes poor mechanics, such as the pronation of the feet and valgus collapse, both of which increase the odds for injury. 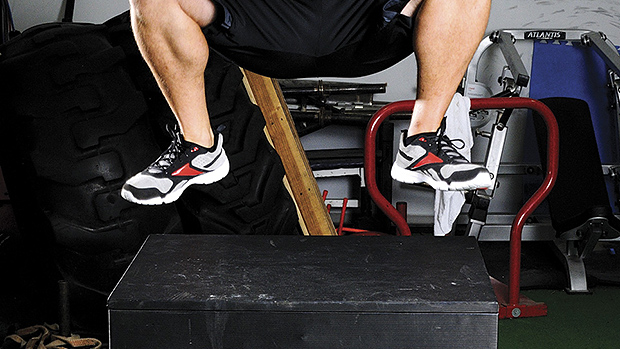 More often than not, big jumps are just a product of fantastic hip mobility rather than pure explosive power. If your landing atop the box is more elephant-like than cat-like, you're jumping too high. In other words, you should land quietly. If you don't, you're not getting full hip extension, which is the whole point of the exercise.

But I get it. You guys won't get the approval you're so desperate for unless your jump sounds like the Hulk landing on a cheap refrigerator. That doesn't mean the rest of us have to bear witness to this stupidity. Besides, your monolith is taking up a lot of usable space.

And Take the Functional Training People With You

While functional training people aren't really the same as CrossFit people, they're almost equally annoying. They too have silly equipment, and the average gym floor is strewn with wobble boards, BOSU balls, and dozens of brightly colored stretchy bands, so many so that if you blur your eyes while looking at them, it looks like the panties littering the stage after some male heartthrob performed a concert.

You may not realize it, but you're all from the Mr. Miyagi school of training, and that somewhere, somehow, you picked up the idea that doing unilateral movements with light weights on unstable surfaces was like the mythic "crane kick," which, "if do right, no one can defense."

Okay, all you Daniel LaRussos, forgive me if I sweep the leg. Both the crane kick and the notion that functional training is actually going to make you functional is largely mythic; just a nice plot line that doesn't really pan out in real life situations.

If balance is your primary variable in your exercise, it won't allow you to use enough weight to elicit increases in strength, and strength is the best road to true functionality. But keep on doing this circus bear on a tricycle stuff. Fine. Just don't do it in a real weightlifting gym.

A Final Appeal to CrossFitters and Friends

I get that you like the variety afforded by CrossFit, along with the competition and the camaraderie, but if you do your workouts all by your lonesome at a regular gym, there's no CrossFit camaraderie and there's certainly no competition.

And you really need that competition thing because winning is the foundation of your self-esteem. Admit it. You're like the guys who get married largely so at least someone – their wife – can witness how they hit the trash basket with a crumpled-up burrito wrapper from 20 feet out.

So c'mon, give us traditional weight lifters a break. Go train in a proper CrossFit box, where the perpetually sore and inflamed all know your name. 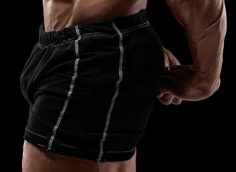 Learn all about testicles and be the life of the party or, alternately, be shunned by everyone there. It kinda depends on the party.
Health & Longevity, Living Better
TC Luoma November 23
Usually, when you're talking weight training, you're talking about the five acute training variables; exercise selection, order of exercise, load, volume, and rest. There are literally thousands of training articles out there, discussing the many thousands of possible combinations of these variables.
Opinion, Powerful Words, Strong Words
Chris Moore October 11