1 – PC Lie: Body love is crucial. You should praise yourself every time you look in the mirror.

Do this instead: Love effort, love achievement, and stop being so self absorbed.

"Body love" is a term used mainly by people who fixate on their bodies, feel like crap about their bodies, and then broadcast to the world the exact opposite. They want you to believe that THEY believe every dimple and crevice of their flesh is attractive, so they've created a movement to make it socially acceptable to shove their belly rolls in our faces.

But talking about how much you love your body means you're probably trying to convince yourself of something you really don't believe. The problem isn't a lack of self-love; it's a lack of effort, action, progress, and achievement... and overwhelming self-obsession. "Body love" is code for this self-obsession. It's forced narcissism, which is now encouraged and applauded these days.

What ever happened to humility? And when did body love become a greater virtue? C.S. Lewis once said, "Humility isn't thinking less of yourself, it's thinking of yourself less." Yet it's seemingly more important to put yourself on a pedestal for no reason than it is to place your focus on things outside yourself.

If you think about it, insecurity and narcissism aren't really opposites. They're both the result of fixating on yourself too much. Body love is how people rationalize that fixation.

Incidentally, whenever people broadcast their love for their bodies, I'm always reminded of the guy or gal who gushes all over Facebook about how much he or she loves their significant other when their relationship is on the rocks. Is it denial? Compensation? Or maybe they're doing the reverse of what's expected (overkill, really) to try and "be positive" about a bad situation.

Need a self-esteem boost? Do something worthy of esteem. Do work. Choose something hard, uncomfortable, and outside your current skill set. Put yourself in a situation where you have to suck for a while because it's that difficult.

This is especially valuable for those with body image issues. Why? Because when you try something for the first time you're going to have to focus on the craft rather than yourself. This will give your mind a reboot. As you become more competent, you'll develop REAL satisfaction, not the contrived, "I love myself for being me" bullshit. That stuff is a facade, plus nobody believes you when you say it.

Achievement always trumps words. And learning to do a new skill when you're surrounded by people better than you is a reminder of what you CAN achieve with the right work ethic. Just get your mind off yourself. Connect. Make actual friends, and not the kind who are also insecure narcissists because they'll convince you that body love is good, but only because they're in the same situation – totally compensating for a belief that's not there.

2 – PC Lie: Never judge other people under any circumstances.

Do this instead: Judge certain people for certain behaviors.

We're all doing it anyway. You're judging me for this article right now. And while most people won't admit this, judging others is a form of self improvement. When we see people doing things, we judge it as positive or negative, and may then either avoid or emulate those behaviors.

Ever see someone order an extra large bucket of popcorn soaked in melted butter at the movie theater? Ever see someone go to town at a buffet who clearly shouldn't be going to a buffet at all? Or how about that friend who keeps up with the Kardashians but can't make it to the gym?

You probably don't want their results, so judging them motivates you to make different choices. And if that idea makes you feel like a prick, then realize that you're judging their priorities, attitudes, and behaviors – things within their power to change – not circumstances they were born with.

Another thing to judge? People who put themselves out there to be judged.

The internet has seemingly given everyone license to shove their nakedness in our faces on a regular basis. So if those bodies are not covered up, then I'll judge what I see, with both positive and negative judgments. And sometimes, my train of thought goes like this: "Oh, she must not have gotten enough attention from her father growing up. And she should probably consider lunges."

Is that fat-shaming? Is it slut-shaming? If that's what you want to call it, then stop modest-shaming people who keep the majority of their clothes on the majority of the time. Our thoughts about your body (and your intentions) will happen because you've caused them to happen. You've asked us to make judgments about your body by putting it on display.

Don't want us to judge it? Try putting clothes on before your next selfie, and maybe take pictures of things other than yourself or your ass cleavage. And if you're going to put Bible verses in your bio, maybe we shouldn't be seeing so much of your cervix. 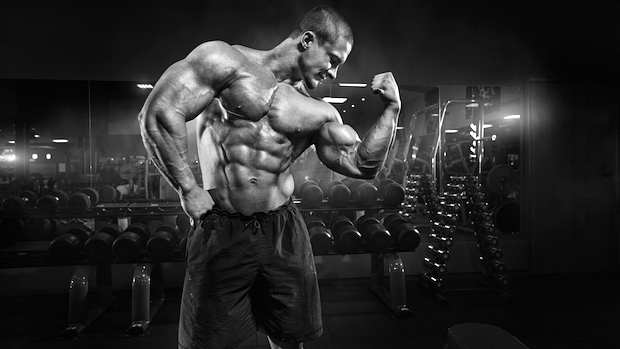 Do this instead: Train for any damn thing you want.

One trend in internet bullshit fitness advice is telling lifters not to work out in order to improve the way their bodies look. Some will even say, "You are not your body parts." Well obviously, but that's a stupid argument. Of course I'm not my legs, but that doesn't mean I wouldn't like mine to look spectacular.

They like to brag about this idea too: "I only train for performance." Performing what? Mirror selfies? Because you're sure post a lot of them. Hey, we all like to look good. Admit it. You'll be okay.

Want perky glutes? Monstrous traps? Round shoulders? A tapered waist? Scary arms? There's nothing wrong with admitting you'd like these. What's lame is denying you do and bashing other people for having these goals.

Of course you can set goals that have to do with looks, but only if...

The Best Way to Set an Appearance Goal

Most people believe that in order to reach one goal you must pursue that one thing alone, with little regard for anything else you'd like to achieve. But there's another way.

Think of it as the corkscrew method. Instead of going full-bore towards one goal in a linear manner, you're inching closer to it, while gradually strengthening everything else along the way. Like a corkscrew digging deeper into the wine cork, you're hitting other little goals as you get closer to the one that you want to achieve the most, and you're keeping it from becoming all-encompassing.

It'll also keep you sane. Because even if you're not perfectly satisfied with your (insert body part here), it doesn't matter that much because your work capacity, strength, speed, skill, or any combination of the these, will have improved. So you're forced to drop the one track mind and take look at your capabilities from a big-picture approach.

Unless you're a paid athlete, stop being extreme and unbalanced in your pursuit of goals, and instead become better in multiple aspects. This doesn't mean you should sign up for a marathon and a strongman competition in the same week. But it should be pretty easy to put a bit more effort into building a body part while also improving other facets of your athleticism.

You don't have to sacrifice everything you've already got going for you in order to have nice glutes. Become more awesome overall, give a little extra attention to something you value, and reap the benefits all around.

4 – PC Lie: Never compare yourself to others.

Do this instead: Compare yourself to some people sometimes.

Needing to know how you stack up is normal. It's called "competition" and if it didn't exist, then sports as a whole wouldn't exist. And lucrative jobs. And dating. And relationships. And pretty much life as we know it.

Don't pretend you're not comparing yourself to people all the time. You wouldn't have searched the internet to find out how much other lifters can bench or deadlift if you weren't using them as a measuring stick to see how you're doing.

Humans are competitive. Which means we're never going to stop comparing ourselves to others. And there are productive ways to channel it if you're not wanting to pay judges to see how you stack up officially.

How To Make Healthy Comparisons

There's a girl at my gym who's around my height and she's been involved in lifting or sports since grade school, like me. She's stronger than me in the squat and deadlift. I compare myself to her because doing so makes me step outside my comfort zone and go heavier. Using her as a comparison doesn't make me sad; it makes me see what's possible. And that's motivating.

The Caveat For Comparisons

When it comes to most commercial photos you see, realize that it's not worth your time to make comparisons. Some people are naturally more photogenic, some have better photographers, and some have better Photoshop skills. Appreciate their art for what it is, don't compete with it.

And for goodness sake don't compare yourself to "fitness models" unless you are one. Their goal is to make money for being pretty, which might sound like a sweet gig. But most people claiming that job title spend more trying to be seen by the general public than what they actually make from it. Don't compete with that unless it's a job you want your life to revolve around.