Ever since Arnold became the face of bodybuilding, big pecs and arms have been the priority of young men in gyms everywhere. Not surprisingly, the bench press has become the favorite lift of gym rats. Ironically, it’s not that great of a pec builder… at least the way most people do it.

If you put all your hopes for bigger pecs on the bench press, you’ll end up disappointed. And I could say the same about other staple pec exercises like the dumbbell flye.

Here are three adaptations to common chest exercises that’ll make it much easier for you to build your pecs.

This could be the most effective pec builder. There, I’ve said it. Am I committing a cardinal sin by saying the best exercise to build the pectorals isn’t a big barbell lift? Well, hear me out.

This is coming from someone who loves the bench press, incline press, and heavy dips… someone who has benched 445 pounds. Yet, at the height of my pressing power, my chest was my least developed muscle group. (My delts and triceps did most of the work.)

The best way to develop your pecs is with an isolation exercise… kinda.

The flye press is the lovechild of a dumbbell flye and a dumbbell press. You do the eccentric (lowering) portion of the movement as a flye and the concentric (lifting) part as a press. There’s a little more to it than that, but take a look:

Why is it the best pec-building exercise? To find out, we need to look at two of the main mechanisms behind muscle growth: muscle damage and mTOR activation.

When you want to maximize both, the key is to lengthen/stretch the muscle fibers while they’re under tension. The more tension the fibers produce when they’re lengthening, the greater the muscle damage, mTOR activation, and subsequent growth.

When the muscle fibers are producing more tension (more force), more actin-myosin bridges are created within each fiber. And the more bridges you have while you’re forcefully stretching those fibers, the more damage you’ll create.

The purpose of the concentric phase is to recruit more muscle fibers and make them produce more tension to increase the number of actin-myosin cross bridges. This sets up the eccentric to be done under the best possible conditions to trigger growth (lengthening the fibers under control while having maximum tension).

If you have very little tension at the end of the concentric range of motion, it’ll be much harder to get the most out of the eccentric phase. That’s the limitation of regular dumbbell flyes and even the bench press.

The flye is a great exercise, in theory, because of the stretch you impose on the pectoral fibers. But because you lose a lot of tension at the end of the lifting phase, you make the subsequent lowering phase much less effective.

Not to mention that you can’t use a lot of weight with normal dumbbell flyes, which also decreases fiber recruitment and tension.

That’s where the dumbbell flye-press combo comes in. By doing the concentric portion of the lift as a press, you can use more weight (more tension) and because of the line of action (pretty directly against gravity) you can maintain a high level of tension right to the end much more easily than with a flye.

More weight and maintained tension mean that you’ll start the eccentric phase, which you’ll perform as a flye, much more effectively. You’ll be using more weight and producing a lot more tension while you’re stretching the fibers during the eccentric. This will cause more muscle damage, mTOR activation, and a greater growth stimulus.

There’s no exercise that’ll provide a better direct growth stimulus to the pecs, especially not with minimal equipment.

Do 6-10 reps per set. Lower the weight slowly (3-5 seconds) and lift at a moderate speed that’ll let you concentrate on contracting the pecs. You should be able to use around 80-90% of the load you’d use on regular dumbbell presses.

I often use resistance bands to “redirect” tension during barbell lifts, allowing me to focus more on certain muscle groups. The sweeping deadlift is a good example.

Another awesome application comes from the mad scientist, Nick Nilsson. You attach bands outside of a 25-pound plate on each side of a barbell that’s been set up for bench pressing. Then you put your forearms inside the loop of the bands.

When you press the barbell, you consciously focus on pushing against the bands, trying to press your elbows in. This will shift the stress away from the shoulders and onto the pecs.

This is actually the correct way to bench press, but very few people do it. Instead they simply press the barbell up, moving the shoulders toward the ceiling. This both shifts the stimulus away from the pecs and increases the risk of shoulder injury.

Note: In the demo I’m not using weight outside of the bands so that you can more easily see the proper set-up. Normally I add weight to properly load the exercise. Total weight should be around 40-60 pounds less than what you use on a normal bench press. 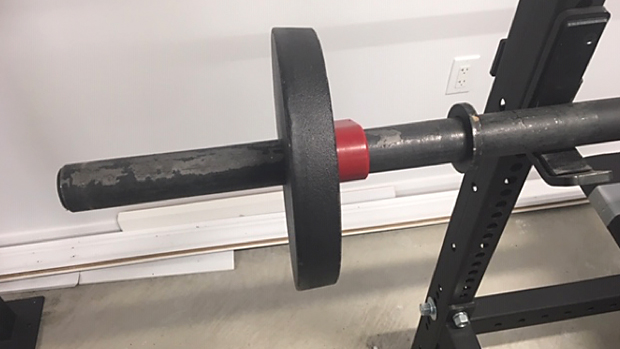 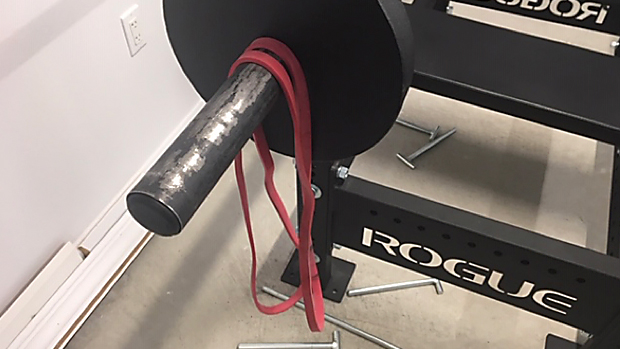 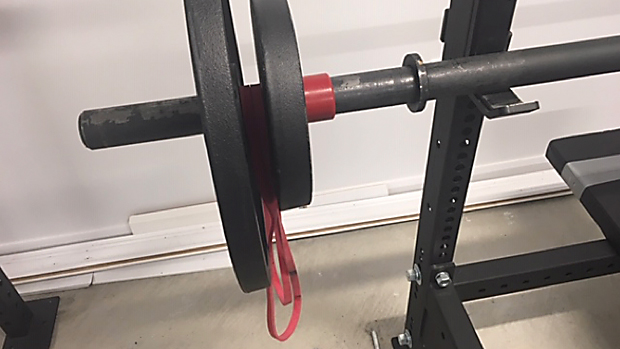 I love this exercise because it targets the pecs better than standard benching, it teaches optimal pressing mechanics, and it greatly reduces shoulder stress.

This is one of my favorite mind-muscle connection builders for the chest. If done properly, no other exercise will teach you how to recruit the pecs as quickly.

I like to use it early in a workout or as the first exercise in a superset (more on that in a second), especially if you have trouble feeling your pecs working.

Because of its nature, you can actually do this exercise very frequently. Every day in fact. Why? Because it will cause next to no muscle damage, so it’s super easy to recover from.

This is why it’s my go-to exercise to fix a lagging chest. When you have a lagging muscle, most of the time it’s simply because you’re not good at recruiting it. And the key to becoming better at contracting a muscle is to practice it often. No movement will teach you how to flex your pecs better than the squeeze press.

If you’re using it as a true hypertrophy tool, not for motor learning, you must go to the point where it hurts/burns. Do sets where you’ll be under tension for at least 30 seconds, more likely 40-60 seconds.

Why? Because this exercise won’t cause much muscle damage or mTOR activation, so you need an accumulation of local growth factors and lactate to grow. The higher your discomfort tolerance is on this movement, the more you’ll benefit.

The squeeze press is a dumbbell bench press with one slight difference: the dumbbells are kept in contact with each other at all times and you’re actively squeezing them inward (against each other) as hard as possible. This simple action will shift all the stress onto the pecs.

Squeeze as hard as possible during every inch of every single rep. This is what makes this exercise effective.

Use a slow concentric/lifting tempo. This makes it simpler to hold a maximum inward press. It will also increase the time under tension, allowing you to more easily reach the required lactate accumulation and local growth factors release.

The structure is important. You start with a peak contraction exercise followed by the multi-joint movements. The bands will allow you to keep stress on the chest even if they’re trashed from the squeeze press (the body would normally want to use the delts), and finish with a stretch movement. Stretching your muscle once it’s thoroughly inflated can give you a little bit more growth stimulus.

You only have to do 1-2 sets to get as much pec stimulation as you’d ever want or need!